We’re doing our very best to keep all of our residents up-to-date on what is taking place with the consolidation. Keep an eye out for our Stronger Together newsletter that will be arriving in your mailbox mid-December.

The Town of Windsor and the Municipality of the District of West Hants are being watched by other municipal players in Canada and business leaders as we make our way through the consolidation process and are undoubtedly wondering if it will be successful. The question is, how will we know if it is successful?

To assist us in determining the success of the consolidation, Dalhousie University has partnered with us through the Management Without Borders (MWB) school program.

The outcome of this project is to produce a document to share with other municipalities in Nova Scotia and across Canada who are considering a merger. The document will include relevant performance metrics to assess if the merger has been successful. When possible, the document will provide benchmarks for these metrics, which will be determined by analyzing the state of affairs with West Hants and Windsor being separate.

Some possible topics that will be addressed within the performance metrics include opportunity costs, taxation, economic development, community identity, governance, services and service level measures.

The students were provided some preliminary information and will present their project outline to the Co-ordinating Committee in the next couple of weeks.

The Management Without Borders Team Profile is shown below.

The Team will produce their work and present it to the Co-ordinating Committee by December 2019.

This project is being championed and sponsored by our Co-ordinator, Kevin Latimer. 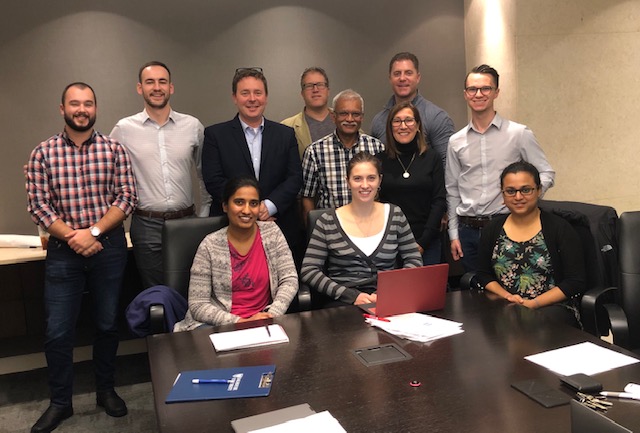 Our Management Without Borders Team

The Nova Scotia Utility and Review Board has determined the new Region of Windsor and West Hants Municipality will consist of a Mayor and 11 Councillors.

The decision aligns with input received from our residents through the community consultation meetings and surveys along with interviews conducted of the councillors and CAO’s of both the Municipality and the Town. The Co-ordinating Committee’s application to the Utility and Review Board for approval of the decision is scheduled to be heard in June 2019.

The polling district map can be seen here

Check out some of the recent news articles from local outlets regarding consolidation:

The Platform and Visual Identity for Consolidation Communication Approved

Beginning in July and continuing throughout the summer, information stations will be set up at community events across the region to provide an overview and update on consolidation, answer your questions and gather feedback. A list of the community events will be included on this website in the coming weeks.

The recommendation comes after approximately 740 residents participated in public meetings across the region, an online survey and paper surveys and is consistent with public input. The majority of participants, 61.5%, indicated their preference for a council size of 10-12 including the mayor, which aligns with the recommendation. The size of the two councils combined is currently 15.

“The recommendation is well supported by the public consultations that were conducted,” said Kevin Latimer, Chair of the Co-ordinating Committee. “Listening to what the public is telling us through these consultations is so important and I’m encouraged with the level of participation and thoughtfulness of responses.”

John Heseltine is the Stantec consultant who conducted the public consultations. He said the online response was among the best he has seen for similar boundary reviews.

Phase Two of the Governance Study will deal with Boundaries and Polling Districts, which is relevant for elections only and does not impact services or taxes.

The Boundary and Polling Districts public consultations will kick off on March 5 with the first of a series of public meetings held at the Three Mile Plains Community Hall at 6 p.m. Four additional meetings will be held throughout the region and an online survey will be available. The details and full schedule for the public meetings can be found on StrongerRegion.ca.

To support this part of the public engagement, maps outlining boundary scenarios will be posted in a number of public locations with paper copies of the survey available at either the West Hants or Windsor municipal offices. Map locations will be posted on StrongerRegion.ca when they are made available.

The Co-ordinating Committee will meet at 6:00 p.m. twice a month on the first and third Monday alternating locations between Sanford Chambers (76 Morison Drive) and Town Council Chambers (100 King Street). The Committee’s December meeting will be held at the Brooklyn Firehall on December 2nd, starting at 6 pm. Co-ordinating Committee meetings are open to the public and can be viewed Facebook Live on either the Municipality’s or the Town’s Facebook pages.